Do Not Be AFRAID! 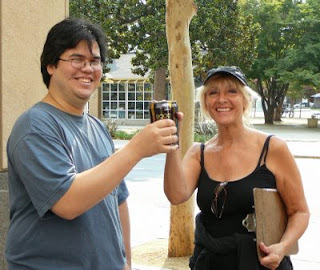 I am proud to announce: "Remember Me" written and directed by Eric Cotenas, produced by Danna Wilberg, will be shown at the Crest Theatre, October 5th at 1pm. Access Sacramento's ninth annual film festival "A Place Called Sacramento" chooses ten films each year to be made by ten local film makers. We will be celebrating our success immediately after the showing with a "9 for 9" premiere party. Tickets are $15 ($10 for show only) if purchased at the Access Sacramento office - 4623 T Street, Sacramento - before October 5th or pay $20 (for show and "9 for 9" preview party) at the Crest Theatre, the day of the event. Show tickets can also be purchased at the Crest Theatre box office.
For more information on our film go to http://www.remembermefilm.com/
Posted by Dänna at 4:43 PM No comments: